As jet-lag is leaving my body, my mental faculties are beginning to awaken once again. And I need all my faculties right now.

Processing two weeks of life in a place like Sierra Leone requires it.

Since many of you faithfully supported our team in your prayers, I want to be sure to share our trip with you in a timely manner. I have some thoughts and ideas percolating, but not well enough thought through to publish. So, for now, I want to share with you a brief overview of our daily activities in Sierra Leone.

Come along with me! 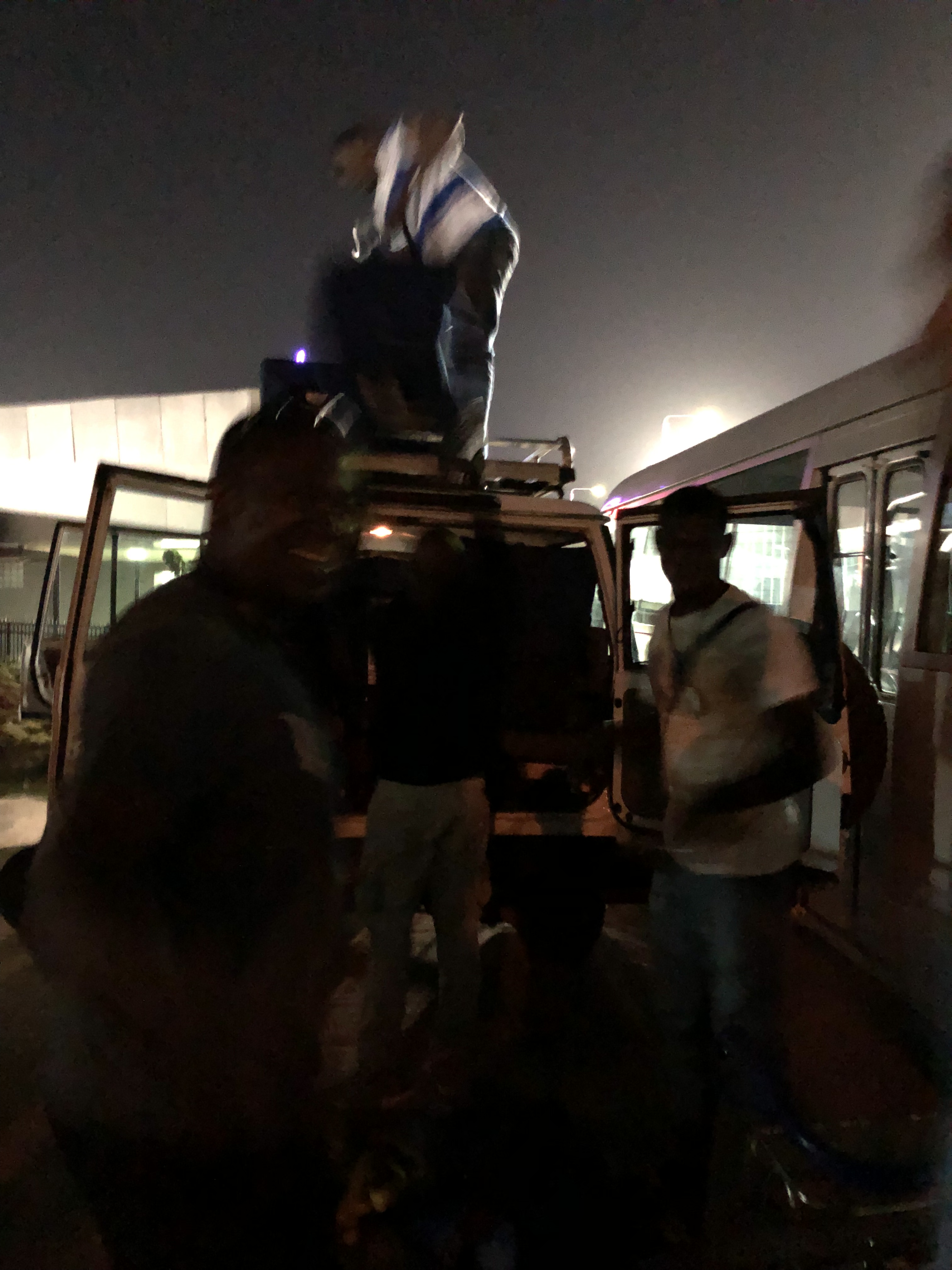 We landed in Freetown at about 7PM on Tuesday, February 12th. The red African sun set quickly after that. Here we are being helped by some men to load our luggage into and onto our ride. It was a tight fit, and Cyrus hung out the window at one point during our drive to fix a loose strap. We arrived safely, about three hours car drive later, at the Campenero Hotel in the city of Waterloo – our  accommodation for two nights.

The next day, we were able to wake and breakfast at a leisurely pace. Then, it was off to the sight of our church’s (Willamette Community Church) sponsored water well. The process was in it’s beginning stages and the guys in our group even got to help dig! We went from there to lunch and from lunch to Grace Village Orphanage where we had time to chat with the Sheriff’s (missionaries in Sierra Leone) and meet some of the children. It was back to the Campenero for dinner and a fairly restful night’s sleep. 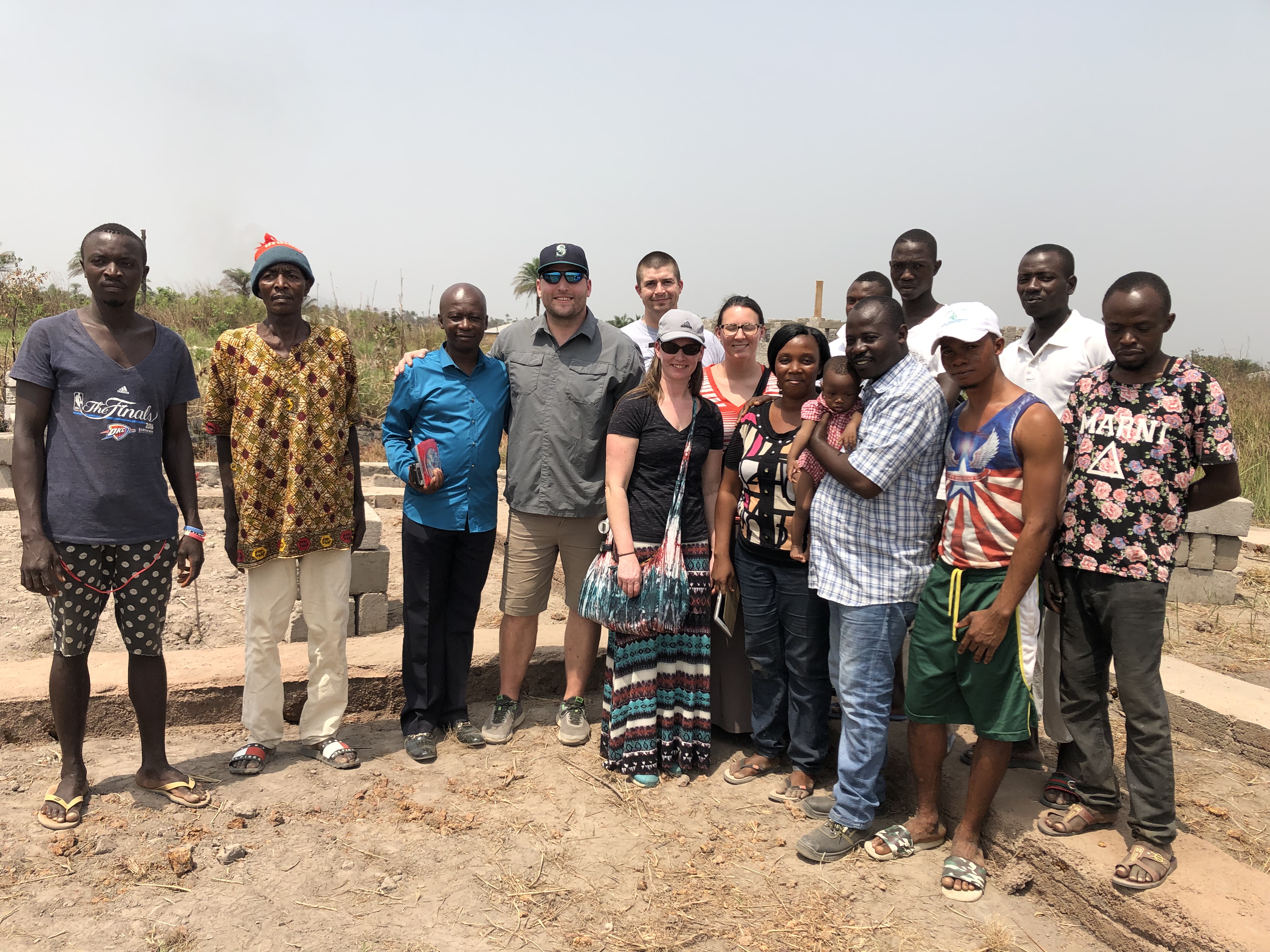 Thursday, the 14th, was the day I began to become more intimately acquainted with Sierra Leone. Many hours on ‘bumpy roads’ (this is an understatement) provided ample time for conversing with our driver, JB, and accompanying pastor, Ben Margai. We made our way to Moyamba, but stopped first in Mile 91, a bustling, dry and dusty, primarily Muslim community, and met Pastor Francis and his wife, Marion. We were able to bring the good news of our church sponsoring a new well to be installed on their property. This well is a crucial need to the area as Muslims who have access to water are not often willing to share. Pastor Francis hopes a community well on his property will be a testimony of God’s love for all.

After this stop, we arrived in Moyamba and got settled in our accommodations. I met Pastor Patrick Coker for the first time and his sweet daughter, Mary. The other team members gave me a run through of toilet and bathing protocol. We ate a relatively late and, for me, an uncomfortably spicy dinner of rice and sauce with some meat. All of this occurred under the watchful gaze of dozens of curious children and adolescents peering in through windows and doors.

Friday began with a walk down to the river and the baptism of a local young woman. Next, we loaded up in our vehicle for another long and even bumpier ride to a village by the name of Gondama. This was probably the most ‘National Geographic’ location we visited during our stay. It was such a remote little village of maybe 200 -300 people that the road to get there was only wide enough for a motorcycle. When we arrived we met the chief and then helped put on an impromptu church service in the school/church building. After the service, they fed us what was probably my favorite meal of the trip – yams with a lightly fried fish and delicious, non-spicy, sauce.

The rest of our day was spent back in Moyamba at Willamette International School’s inaugural Sport Meet. We would call it a track meet here in the states. But they include some extra events like tug-of-war and musical chairs. It was incredible to watch the talent of the students. Almost all of them ran in socks. I think I saw maybe one or two pairs of spikes, but that was it. They were grouped into Houses for competition. Cyrus and I supported the Yellow House.

There were too many events to complete the Meet in one day, so things came to a pause close to sunset.

The following day, Saturday, we spent the morning with the children that Pastor Patrick has taken under his wing – vulnerable children in the community. These are children our church congregation is devoted to praying for.

That afternoon it was once again time for the Sport Meet. A few of the events later in the day were open to the community. This drew a massive crowd. My guess is that there were probably 500 -600 people completely encircling the track. The energy was palpable. We returned to our house after the meet was over for another spicy dinner. 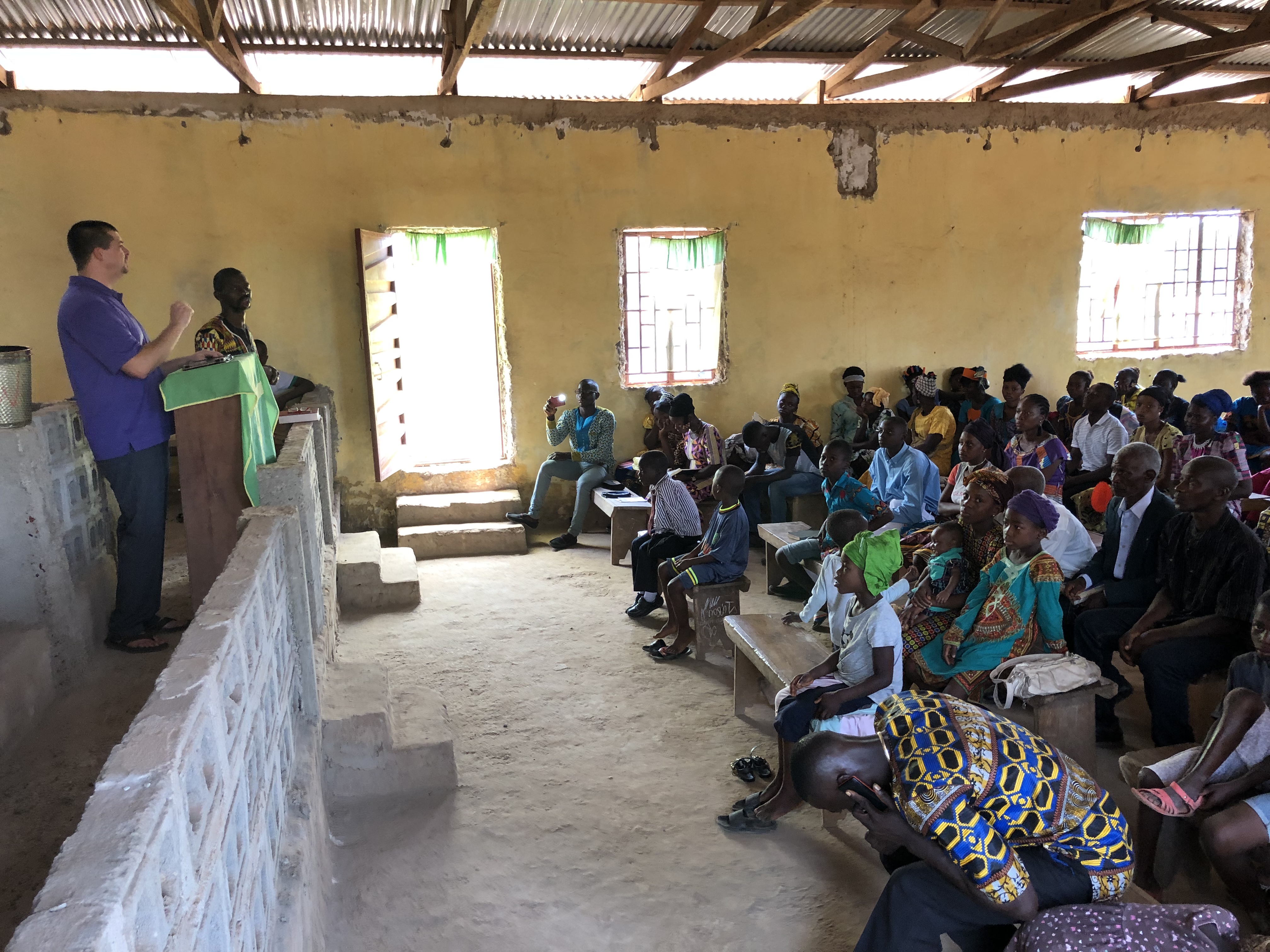 Sunday was a day I had been looking forward to. I was excited to experience the worship service of another culture. I was not disappointed. The music was like nothing I’ve ever heard before. Simple in instrumentation, yet so full. It was here I first felt what I call the pulse of Africa – the strong, almost enchanting rhythm of its music. Video doesn’t do it justice because video only allows you to hear the music. When your’e in the midst of it you can actually feel it vibrating through your whole being. After the music, Cyrus preached a message on the importance of preaching the gospel to ourselves.

When church was over, we had our final meal in Moyamba and prepared for the long and bumpy ride back to the Companero in Waterloo.

Monday, the 18th, began phase two of our trip to Sierra Leone. Cyrus began his week long course on the Gospels at Grace Bible Institute. I began the first of two days meeting with and teaching pastor’s wives (and wives to be). 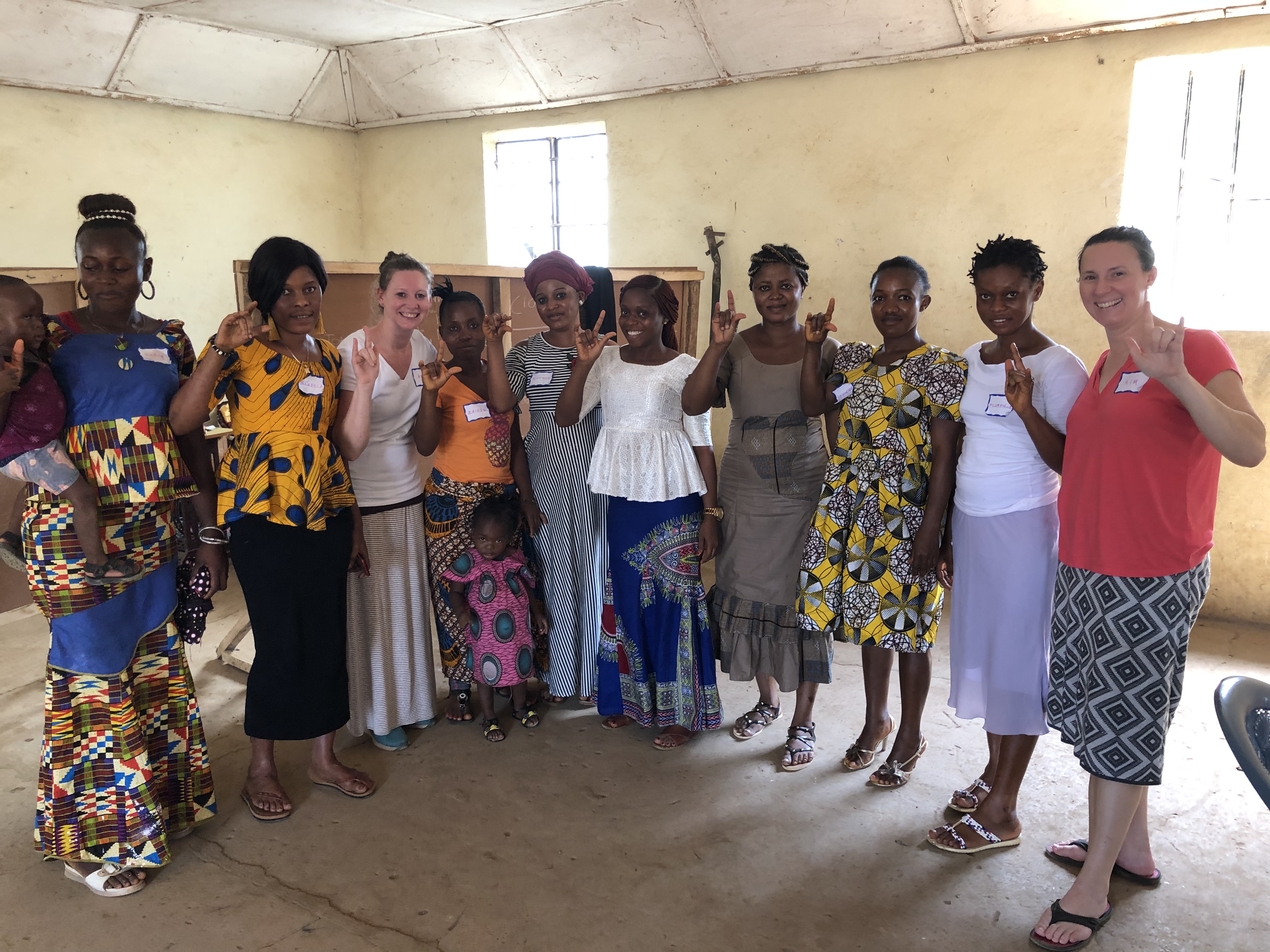 I covered topics such as loving God and loving others, the three enemies of believer and how to respond to them, and what to do with suffering. This was by far the most uncomfortable teaching I have ever done. Between the oppressive heat and humidity, the lack of knowing my audience, some of the women’s lack of literacy and Biblical understanding, and the cultural differences; all of these made for what should have been a disaster, yet for what turned out to be a show of God’s work and not my own. On a fun note, Amy and I taught the ladies the sign for I Love You 🙂

I suppose that sums up Tuesday as well, so I’ll move on to Wednesday. 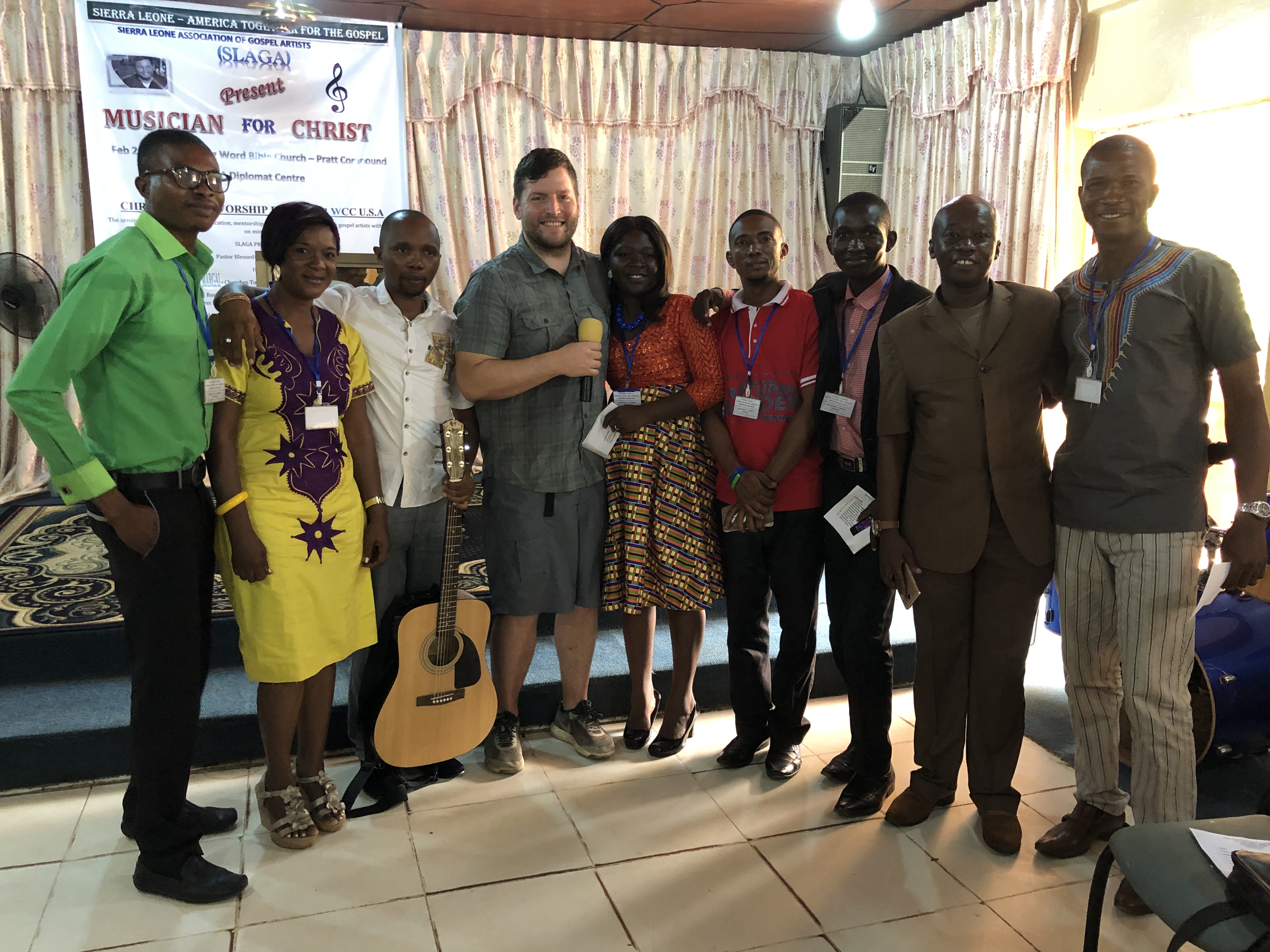 Cyrus continued his class on Wednesday, while the rest of our team (Chris, Amy, and I) headed toward Freetown with Ben Margai for a Worship Leaders seminar. A few dozen worship team leaders and participants gathered to hear from Chris (our church’s worship director). Following his message, several of the attendees performed some of their music for the entire group. It was a pleasure to observe this group of people and to enjoy their gifting.

Wednesday evening we braved the outdoor Waterloo market with Emily, one of the missionaries hosting us in Waterloo. We bought fabric for matching team clothes and followed Emily down the cramped and noisy food aisle/road while she picked up a few things she needed. It was so crowded and required such attention to move through that I didn’t have as much opportunity to observe the vendors or diverse food offerings as I had hoped. 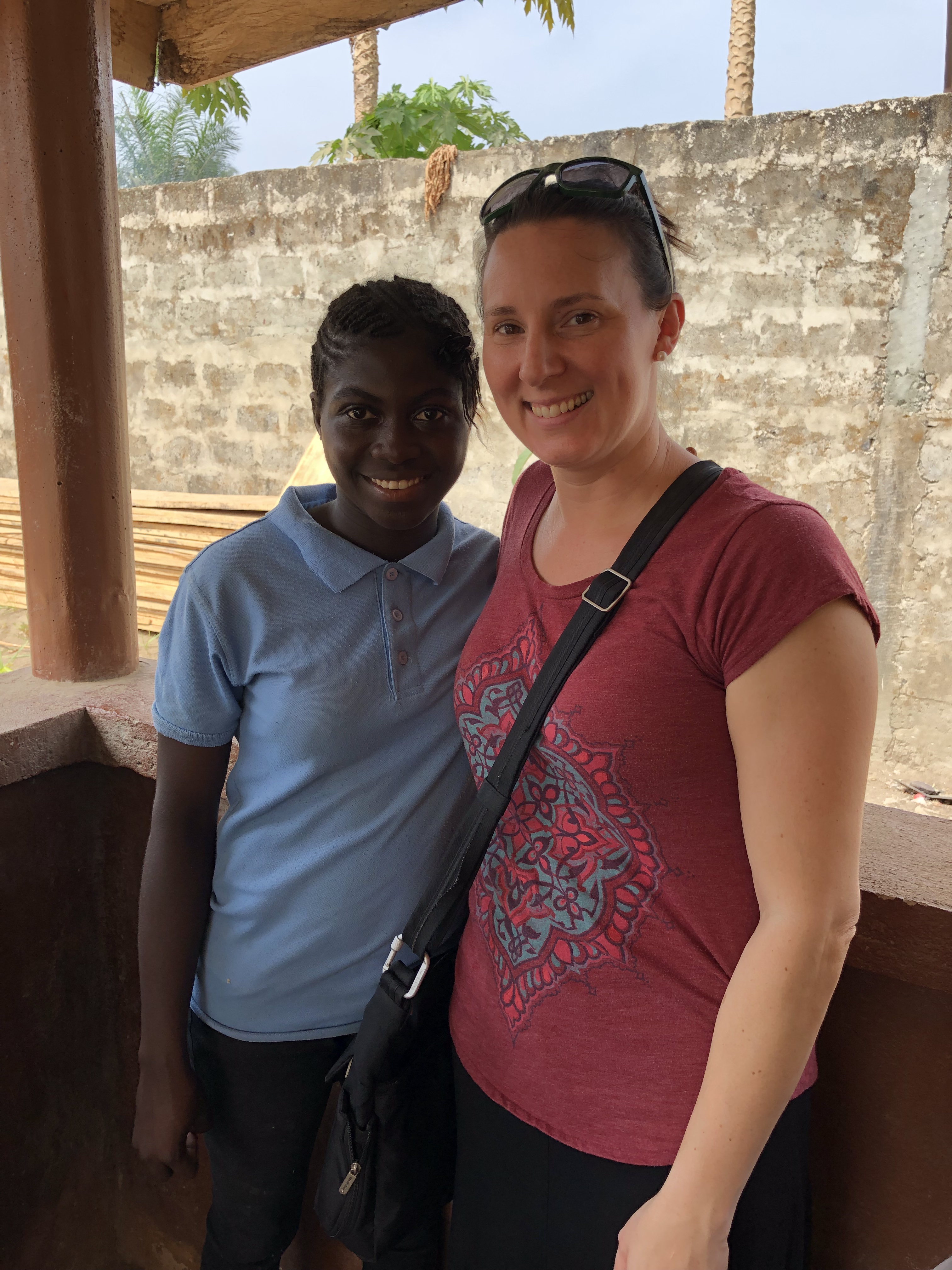 On Thursday morning, Amy and I went back to the Grace Village Orphanage with another missionary, Rachel. We did crafts, and read books, and sang songs with the children who weren’t in school at the time. Later in the afternoon, Amy and I worked on a project sorting clothes for these rapidly growing children!

Friday was test day for all the Bible Institute students and our whole team pitched in to help Cyrus grade exams. After lunch and a little time back at our lodgings, our trip came full circle. We went with Peter Sheriff, Emily’s husband, back to the sight of the new well. It was finished. Chris, Cyrus, and Peter spoke to the community about the Living Water only found in Christ, the lock on the well pump was removed, and clean water began to flow! 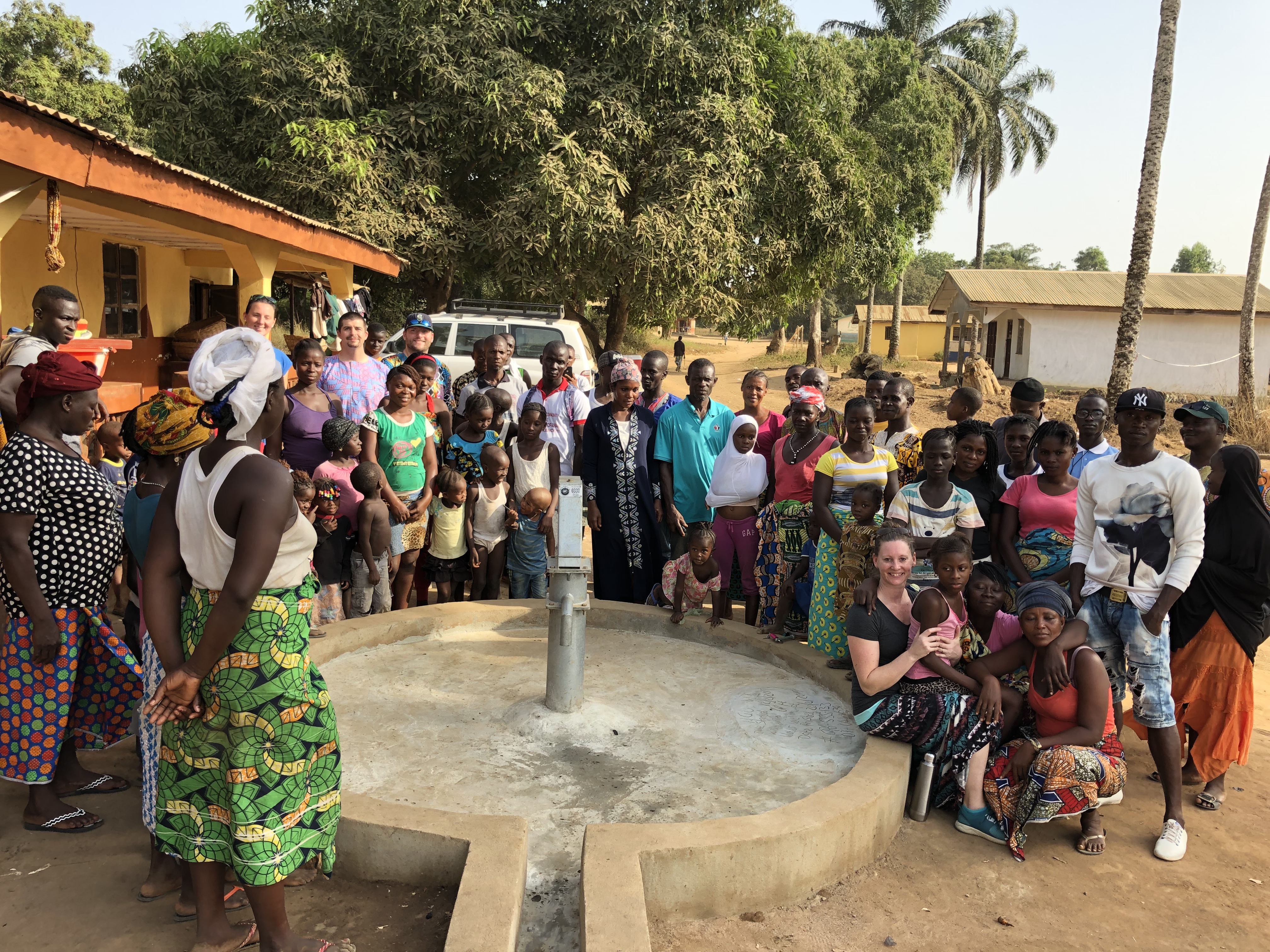 Saturday was a leisurely day spent partly at the beach and partly packing up to head home. At times the beauty of the beach caused me to forget that I was actually in one of the poorest countries in the world. Money cannot buy beauty that comes from God alone. 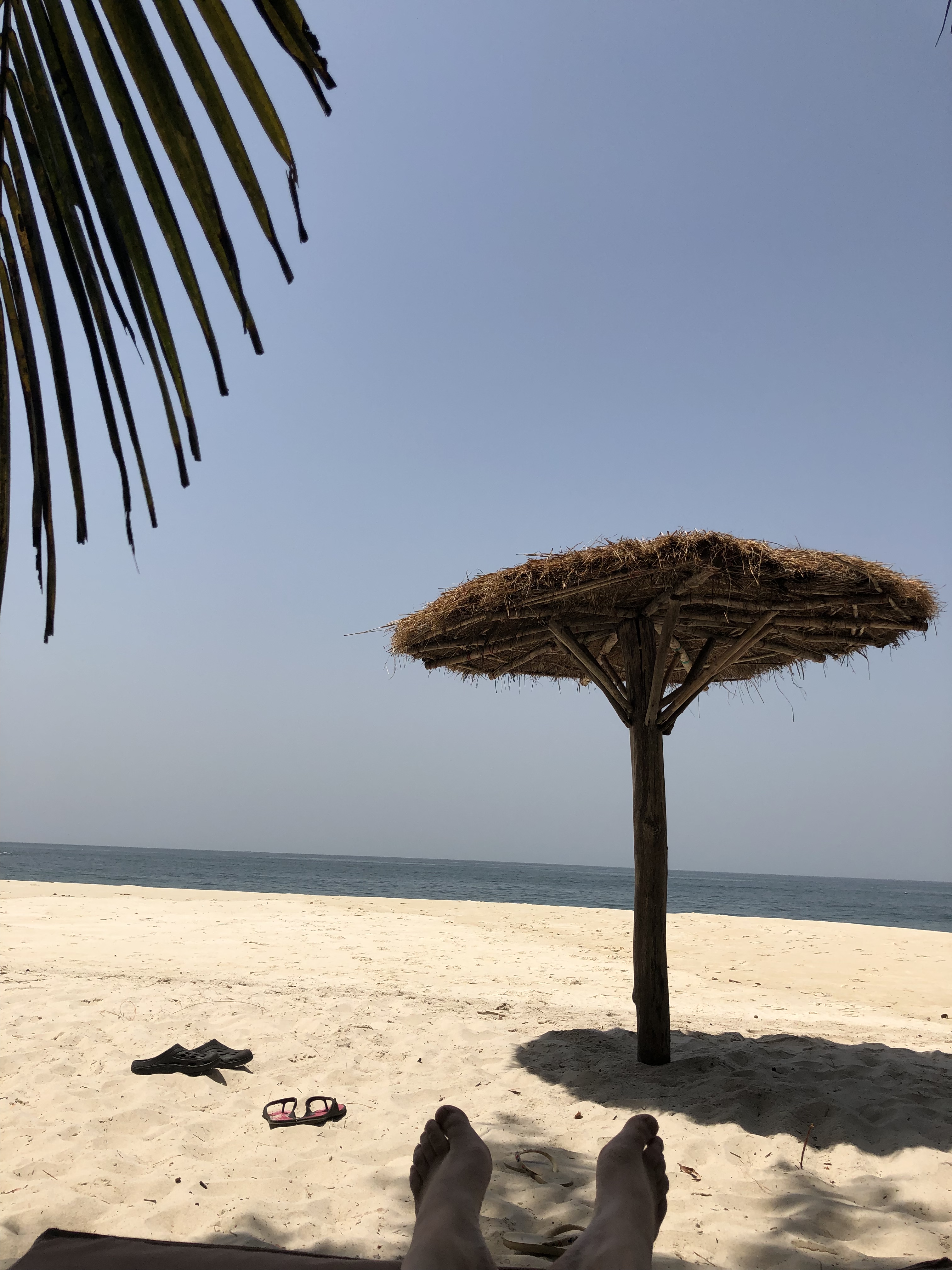 Sunday we went to church with Peter and Emily in Waterloo, had lunch, and then hit the road for the airport. All our hearts were longing for home by this point. From the time we left Waterloo until we arrived back in Albany, nearly 43 hours elapsed. It was a long journey home from which I am still recovering. 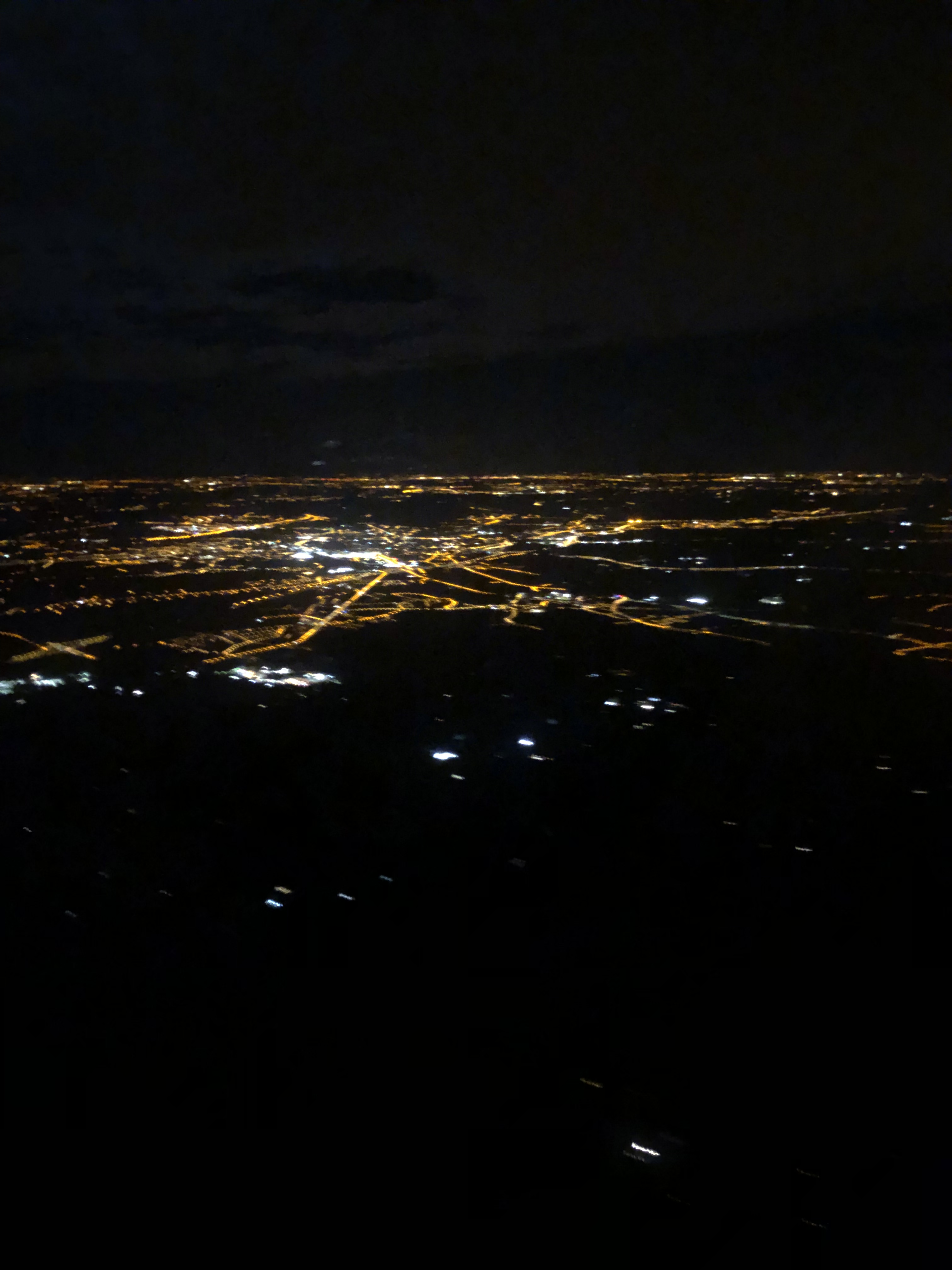 I hope this gives you a small glimpse into our trip. There are feelings and experiences I still can’t quite put words to, but I hope to get there soon. Until then, if you have any questions, please ask! I don’t know what everyone would like to know, so let me know. That was a fun sentence 🙂

Thank you once again for all your prayers and support!

← Call Me Jonah
Questioning My Answers →